Based on what charges were workers in Karaj attacked and beaten
It had been almost a year since the last General Assembly of Coordinating Committee to Help Form Workers’ Organizations, back in March 2011. According to our by-laws General Assembly must be held on an annual basis, so the membership would be able to conduct a review of the steering committee, its activities, inspectors, our financial affairs, and also to elect a new steering committee and inspectors as well. Thus in February 2012 Coordinating Committee sent a formal request to Ministry of Labor requesting one of their auditoriums, to be used for our General Assemblies. But their responses to our repeated requests were negative, and they verbally stated their objection. Hence based on majority of membership’s decision we decided to hold our sixth General Assembly on Friday 15 June 2012 at Mehr Shahr city of Karaj Province, and to also simultaneously still pursue our rejected request for space.

I and three other friends Messer Jamil Rast’khadive, Rahman Kardar, and Ali Hossaini had left city of Saghez on Thursday afternoon, heading towards Karaj. We arrived in Emamzadeh Tahr around ten thirty at night, and after calling a friend we were picked up by two other friends whom took us to the house in which our meeting was to be held. After my release from jail I realized that neighborhood is called Aram Boulevard.

After going up three flights of stairs we arrived at our host’s house on the third floor. After knocking on the door, a most respectful young lady opened the door, and introduced her self to us. When we entered I felt as if we were entering a grocery store that sells eggs! All the walls in that house were covered with empty egg boxes. Our host explained that such covering helped to reduce all the sound and noise emanating from the house, so as not to disturb the neighbors. By the next morning most other attendees had arrived, and while we were having our breakfast and casual conversations, perhaps no one was thinking about security forces later attacking our gathering and arresting us.

The sixth annual meeting of Coordination Committee to Help Form Workers’ Organizations began at eight in the morning and it was formally initiated by election of a steering committee. After an hour, there were scattered remarks and conversations amongst the attendees about unsuitability of that space for our gathering. When a speaker would start their remarks, they would be asked to lower their voices so as to not bother the neighbors. In face of such obstacles the meeting went on till noon, when all of a sudden the news spread amongst attendees that security forces had surrounded the entire neighborhood. I and a few others plus our host went to a window to take a look. Right across our house we saw a huge gathering of security forces, but we were told by our host that they were not there for us, and asked to be calm! As we continued our meeting the door bell was rang. The person that opened the door said that some one needed the key to the rooftop.

At exactly 12:20 the attack on us began with shots being fired, and tens of armed security forces in civilian attire, cursing, screaming and insulting, banging on the door and demanding to be let in. Everyone inside that small house was trying to hide where ever they could. As soon as the door was opened up many armed security forces in civilian clothing rushed in, pointing their guns in our faces and mouths and telling us to roll on the floor, faces down. Many times I have seen on television how Israeli forces attack Palestinians and indiscriminately starts beating them up, but these agents attacking us workers in that house were a hundred times worse. All of us were forced to spread on the floor, with their hands behind their backs, and if anyone dared to move they would be attacked by a group of these thugs that were fed and paid by our labor and our toils. The insults they were screaming at us could only be heard from their lips, for I’m truly ashamed to even mention any of it in here. When some of the agents recognized our Kurdish attire, they began attacking us even more insanely and screaming:” You’re the ones responsible for killing thousands of Guardian Corps, and what the heck are you doing in this city,…” An agent began walking on my back and started kicking me. One of my fellow workers laying close to me screamed at him:” Don’t kick him, he has a kidney problem.”  The agents reacted by hitting me harder, screaming back: “Let his kidney explode…”

In this massive attack every single one was severely beaten up, while agents kept screaming that we were a bunch of terrorists. There were a lot of terrified people gathered outside of building and asking what was going on, and why they were shooting? Why there were so many people in there? Why they kept beating us up? An officer commanding of agents asked some of the people to follow him inside the room, and a few women followed him inside observing all of us in hand cuffs, spread on the floor, faces down. One of the women asked who we were.  Before we could say anything, an agent told her that we were terrorists and that people should be thankful that we were apprehended. If any of us tried to tell the truth to the people we would by attacked by a group of agents. By the time we were evacuated out of the house practically everything inside that house was broken and destroyed, with only a handful of object still intact.

Besides being hand cuffed I was also tied at my feet. I and Hussein Pirooti were the first one to be taken out of the house. As we were exited we were also being video taped. There was also a group of agents down by the stairs that would beat up, and insult us some more as we passed them. We were forced to enter the cars with our hands tied behind our back. If anyone’s head was raised, they would be hit. It took a very long while for them to put all of us in those cars, all along we had to endure that hot, cramped space, hearing all those profanities and disrespect. The handcuffs were so tied that Khalid Hossaini and a few others began protesting, and saying their hands were getting paralyzed. Agents responses were along the lines of: “Shut the hell up. Your hands are getting paralyzed, tough. I wish to god all your hands gets paralyzed.” Finally they cars began a long journey towards the prison. Again we were subjected to outrageous disrespect and profanities while exiting the cars. Everyone was blindfolded, and lined up. Slightest sound out of anyone, and they would be hit by a group of agents. We were put in several large halls, and after our shoes and belts were taken away, everyone was divided into to large groups, each in a huge room.

At this point we realized we were inside ward 94 of Rajaei Shahr prison of Karaj, which is a high security ward, for political prisoners and managed jointly by Ministry of Information, Armed Forces and Guardians Corps. According to prisoners that were there before us, no on in that ward even had visitation privileges. A prisoner I met in there Mr. Sied Mahmud Dolt’abadi had been incarcerated for 32 months, his case still undecided.

The interrogations began after we were transferred to individual cells. Personally I wasn’t disrespected during my interrogations, but I heard account of some that were disrespected and beaten up during their interrogations. Saturday morning at four o’clock we were all told to wake up, and face the wall. All were blind folded again, and told not to make a sound. Everyone was taken out of cells individually, and threatened to sign a piece of paper and take a picture. Initially we though the paper was some kind of finger printing, but soon realized that it were a sort of a recognizance form. Everyone refused to do anything with papers. We were summoned again Saturday morning and forced and threatened that unless we resigned from Coordinating Committee, we would stay in prison. But not a single one broke down, and everybody unanimously defended our Committee. Despite intimidation tactics, insults and violence all of us were in high spirits, and without any fear we were singing our labor anthems.

After being arrested for 32 hours, without a single one being told exactly what the charges were, we were freed form prison. Once released, we went back to the neighborhood and met some of the people who had witnessed our arrest. During our conversations we told them we were neither terrorist nor saboteur, but only a group of workers having a labor meeting, and apologized if we had caused them any inconvenience. People told us they had recognized from the first glance that we were decent folks and security forces were lying to them.

This was a brief account of what happened to us on Friday 15 June 2010 in Karaj, when members of Coordinating Committee were subjected to disrespect, profanities, beating and intimidation without a single charge.


On Friday, June 15, 2012, about 60 members of the "Coordinating Committee to Help Form Workers’ Organizations" were arrested by the agents of the Intelligence Ministry after they raided a house in city of Karaj while an annual meeting of the coordinating committee was underway.

Participants in the meeting were severely beaten by the security agents and transferred to Rajai Shahr prison in Karaj. The majority of detainees were released on June 16th with the exception of two women and seven men who have been detained incommunicado.

Their colleagues and family members are seriously concerned about their safety.


Petition
WHEREAS: We are seriously concerned about the safety of detained members of "Coordinating Committee to Help Form Workers’ Organizations". They have been imprisoned--and mistreated--solely for their peaceful exercise of workers' rights to freedom of expression and freedom of association; They are: Mitra Homayooni, Reyhaneh Ansari, Alireza Asgari, Saeed Marzaban, Cyrus Fathi, Masoud Salimpour, Maziar Mehrpour, Jalil Mohammadi and Faramarz Fetrat Nejad. Many more labour activists have been arrested, imprisoned, persecuted and sacked form their workplaces. The repression of the Iranian labor movement has been intensifying.

AND WHEREAS: Article 22 of the International Covenant on Civil and Political Rights (ICCPR), to which Iran is a signatory state, specifies that “everyone shall have the right to freedom of association with others, including the right to form and join trade unions for the protection of his/her interests;

THEREFORE: We the undersigned strongly condemn the recent raid and arrests of over 60 workers in Karaj, and we demand that the international community declare all the members of "Coordinating Committee" continued detention illegal and bring all possible pressure to bear upon the Islamic Republic of Iran to immediately and unconditionally release them, and all other imprisoned labor activists in Iran. 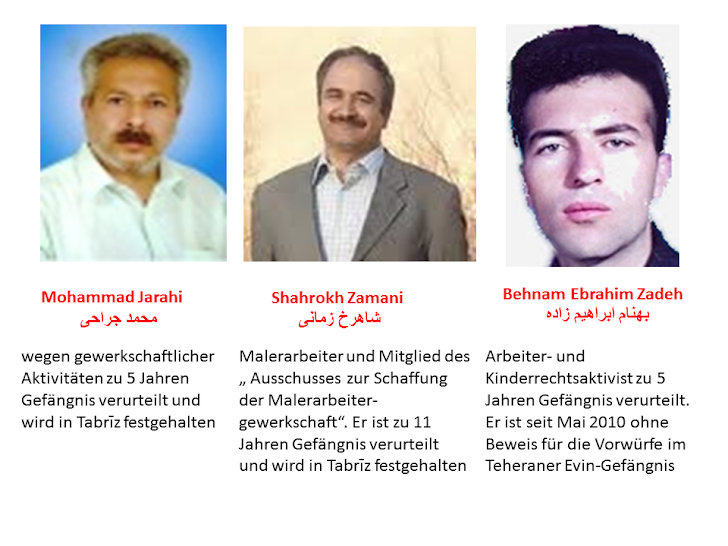